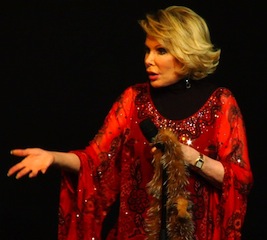 Joan Rivers was one of a kind. Hilarious, driven, feisty and bold.

And what I loved about her most: She was wrong in all the right ways.

As a female comic, it would have been an absolute dream and honor to be able to sit down with Joan Rivers and talk about comedy. Or as she always called it, “show business.”

I crossed paths with Joan Rivers on a few occasions early on in my television career. I was much younger at the time and I hadn’t begun doing stand-up yet. So, not knowing what to say, I never approached her. What a missed opportunity that was. Youth is truly wasted on the young!

Unfortunately, I cannot go back in time and my day with Joan will never come. But if it did, this is what I imagine our conversation would sound like…

(The scene: As she sits down to our lunch at Sarabeth’s in New York, Joan is lamenting the table selection for our meeting)

Rivers: What … all the seats next to the kitchen were taken?

Rivers: No I’m not, but thanks for asking.

Rivers: Are you working here now? I can see the bread on the table.

(The waiter walks up)

Waiter: What can I bring you to drink?

Rivers: I’ll take anything with a roofie in it. I want to forget about where we are sitting.

Schiavo: Omg, are you really that annoyed about this table?

Rivers: Annoyed? That would be a step up!

Schiavo: It’s not that bad.

Schiavo: Ok look… I have a big comedy show coming up and I was hoping for some advice.

Rivers: Who said anything about your butt. Just be funny.

Rivers: If you know, then why are we here?

Schiavo: I feel like some of my jokes are stale.

Rivers: Well, they can’t be any more stale than this bread. I thought I was coming to Sarabeth’s and somehow I ended up in Hell’s Kitchen!

I’m sorry, I don’t want to be a bother but, this bread is harder than Liberace at an all male cabaret show.

Waiter: Hahaha. No problem, I’ll get you some more.

Rivers: Thank you so much, sweetie. You’re a doll. Are you single?

Rivers: You’re adorable. Are you gay?

Rivers: What?! It’s a valid question.

Rivers: Marlaina, let me ask you something. Are you funny?

Rivers: (eye roll) That is the worst answer I’ve heard since Gwyneth Paltrow called her divorce a “conscious uncoupling.” Nonsense.

Schiavo: Comedy is subjective. Some people get you and others don’t.

Rivers: Bullshit. You’re either funny or you’re not.

Schiavo: No! Why would you say that?!

Schiavo: That’s not true. Put yourself in my shoes. You want me to look into the eyes of a comedy legend and call myself funny.

Rivers: What the hell are you saying “Mmmm” for? There’s no food on the table.

Schiavo: No … I said, hmmm. Just thinking about what you said.

Rivers: Finally! I was turning into Calista Flockhart over here.

Schiavo: What do you think about me writing a book?

Rivers: What am I, your therapist?

Schiavo: Seriously, what do you think?

Rivers: Listen kiddo … if Snookie can write a book, so can you.

Rivers: The best advice I have for you is this: believe in yourself and keep going. No gig is too small or too far. You want to write a book? Write one. Or twelve (wink). Oh! And stay away from Charlie Sheen. He’s a ding-a-ling.

Rivers: Now … is there anything else I can help you with, my dear? I’m going to start charging for my services.

Thank you for the endless laughter and inspiration, Joan Rivers. Rest in Peace. xo